Feverfew is a commonly used herb by Lyme patients. It has been used for centuries and is extremely well-known by herbalists and is widely available in commerical formulations.

Feverfew (Tanacetum parthenium) has most traditionally been associated as a prime remedy for migraines. However, it also has a storied history of use for arthritis. 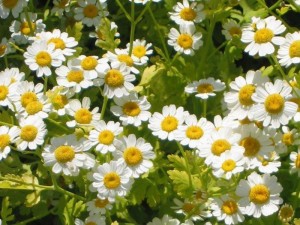 More recently, it has been shown to have significant anti-cancer effects through a direct cytotoxic mechanism. In a mouse model it was found to permanently decrease proliferation of mouse fibrosarcoma and human lymphoma cell lines.

There is also some literature to support its’ effect against proliferation of leukemia cells and some herbalists recommend it to patients who are at increased risk of developing leukemia secondary to radiation treatment.

While generally considered a safe herbal remedy, side effects can occur and include mouth ulcers and allergic reactions amongst others. The herb should be taken only under the direct supervision of a physician.